For many reasons, the least of which is that Blogger is a blocked website at work, I am moving my blog to another location.

I've posted once there so far...things have been a bit BUSY in the land of me lately. There may be more there by the time you have seen this!

So long from Blogger...hello Word Press!
Posted by Unknown at 10:51 AM No comments:

She is resting (as much as one can in the hospital) and working on getting better. He finally got the test results from the fluid that they drained on Wednesday. Negative for cancer cells!!!!!!! That was a HUGE relief for all of us. Mom still has a lot of fluid in her legs and it's not coming off quite as fast as the doctors want. They have increased one medication in hopes that it will help with that. If not, Mom might be doing dialysis on a temporary basis to help out her kidneys. That is not definite, but something the doctors are discussing.
Posted by Unknown at 7:44 PM 1 comment:

Email ThisBlogThis!Share to TwitterShare to FacebookShare to Pinterest
Labels: Mom

So this is my first post since JULY and a lot has happened!

-We drove to FL. While there, DJP became very brave and actually put his head in the water at the pool! He also thought drinking the pool water was funny... We were also able to visit with friends on the drive home that we haven't seen in a few years which was nice.

-Our trivia team won the finals of Season 29! It was a huge surprise because we didn't think we had done well enough. However a big shout out to Jason's dad because he kept telling us that The Green Lantern is somehow related to The Lone Ranger and that was one of the four final questions. We were the only team who knew that!!!!

-School started again for both Jason and myself. Jason is working on a proposal to teach a seminar class on Baseball. I am getting used to having a new principal and going to a few new meetings. I will also be doing some curriculum writing this Fall for the Common Core Standards(adopted here in MD last year). DJP has also been to class with Jason due to an occasional babysitting issue. He likes to wonder around and even got himself up on a chair and sat at a desk!

-DJP is now 18 months old! He's weighing a hefty 27ish pounds and 33ish inches tall. He is picking up new words and sounds all the time. The newest from this week is "Gobble Gobble" because he likes to carry around the turkey from his FP farm set. DJP has learned to run from place to place and the number of bumps and bruises has increased as well! His latest stunt is climbing up the sliding board and sliding down on his tummy-no fear anymore!

-Mom was working on her follow up chemo treatments until this past Monday when she went back into the hospital. She is retaining fluid again (like she did 2 years ago) and the doctor is running every test possible. She's doing okay, just very tired because of all the monitoring and testing. She was moved to the oncology floor yesterday evening. Hopefully she will get more rest there. If you're reading this and didn't know sorry...I cannot call everyone! However if you would like to see/call Mom, let me know and I will give you contact information.
Posted by Unknown at 8:51 AM 1 comment:

DJP has added to his vocabulary as of this week the word that most parents dread hearing...

However, DJP has given the word 'no' some added enthusiasm: he says it with a smile and vivacious shakes of his head. Due to this motion, there is no picture (unfortunately)!
Posted by Unknown at 8:41 AM No comments:

Mom went to see the medical oncologist yesterday to find out what the next plan was to be.

What she found out was that she will be having chemo treatments once a week for two weeks and one week off for nine sessions, hopefully starting on Friday, July 15th. The doctor did warn her that she may experience more side effects this time (like hair loss). If all goes as planned, she will finish up in January 2012. This plan is just for good measure. What the doctors have found with pancreatic cancer is that once the chemo/radiation/surgery have been completed to rid the body of the cancer, another treatment plan of chemo diminishes the chances that the cancer will return.

Email ThisBlogThis!Share to TwitterShare to FacebookShare to Pinterest
Labels: Mom

DJP's hair was getting a bit long...that even he was pushing it out of his face! 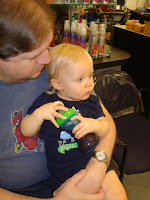 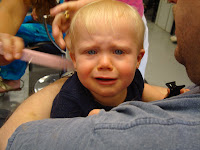 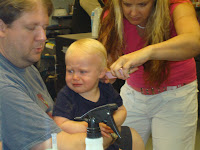 AFTER
(Well...DJP was not very happy afterward and did NOT want his picture taken.)

And a big thank you to Ms. Clare (aka Delilah) for cutting DJP's hair!
Posted by Unknown at 5:38 PM No comments:

DJP is just a bit over 15 months old now. WOW! Time sure has flown! (And yes, he does know how to use the iPad and the iPhone!)

We had a well visit to the doctor today in which DJP did another first: he has been able to reach our door handles and pull them down (they are of the lever variety) but has not been able to pull the handle and open the door at the same time. DJP apparently wanted out of the exam room, reached up for the handle, pulled it down, opened the door and dashed out. Jason went to follow him. The receptionists got a big chuckle out of the spectacle. Of course, DJP went straight for the toy box and picked out a truck to push around.

DJP's current stats:
Height: approximately 32 inches (he becomes Mr. Squirmy Wormy when you try to lay him flat when he doesn't want to be flat)
Weight: 23 lbs 14 ozs (which doesn't seem to be a lot until you hold Mr. Squirmy Wormy)

DJP is also acquiring quite a vocabulary: Hi, woof, Ma-ma, Da-da, no (said with smiles), more (without the "r" and signing), Grandma (sounds like Ma-ma but different because he's not saying it to me!) and various other sounds that we have yet to decipher.

DJP is eating pretty well except for the fact that meat gets pushed away as do noodles and bread. Some new favorites are pretzels and Craisins as well as any freeze-dried fruit (justtomatoes.com has a wonderful variety) including cherries (which I think are the tartest things ever).

DJP enjoys having Ophelia around again (she has returned from Spa Grandma) and likes to lean in and attempt to give her kisses. Ophelia is not so sure about that and tends to shrink away as fast as she can. He also enjoys that the cat's water bowl is on the floor and becomes his own personal water table when Jason and I are not quick enough to stop him. I've never seen a bowl of water emptied so fast!

Speaking of kisses, the cat is not the only recipient of kisses from DJP. He will occasionally give Jason and me kisses at bedtime when asked but the cutest thing happened over the weekend. My mom was visiting and we told DJP to give Grandma kisses before going to bed. He not only went over to her and gave kisses but also walked over to me and to Jason and gave us each kisses before we took him upstairs.

DJP also went to his first Orioles v. Rays game. He spent most of it walking around with me or wandering around the open areas on the club level. We did take him out into the stands for about an inning and a half, but he was not fond of the music nor the cheers/jeers from the surrounding crowd. We did happen to bribe him a bit with some ice cream...

...and then once we left the game, it didn't take more than five minutes before he was asleep.

Posted by Unknown at 7:49 PM No comments: 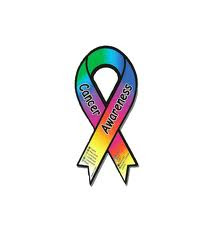